The entire saga of HUNDEN‘s bans dates back to 2020, when the Dane was busted for using the coaching bug and served an eight-month sentence. It didn’t end there, however, and he was once again banned from participating at ESIC-sanctioned events, this time for two years for leaking “sensitive” documents to a rival team in August 2021.

The second ban prohibiting HUNDEN from participating at ESIC events was lifted on December 2, nearly 10 months before it was due to elapse. The little information made public was that it happened “in light of a constructive engagement” at a meeting on November 29, but not much is known about the encounter between the two parties other than HUNDEN tweeting a thankful note to his lawyers after the ordeal.

We’ve put together a timeline of the key moments that shaped the HUNDEN-ESIC saga up until the coach was mysteriously unbanned in early December.

Silence from HUNDEN and ESIC has left many questions unanswered

The coaching bug scandal exploded in August 2020 when HUNDEN, Ricardo “⁠dead⁠” Sinigaglia and Aleksandr “⁠zoneR⁠” Bogatiryev were banned by ESIC for the use of an exploit that allowed coaches to see areas of the map that they should not be able to, potentially giving the bugged coach access to key information of a round’s development during a match. This first wave of bans was just the tip of an iceberg that would end up with a total of 37 coaches sanctioned a month later for having used the exploit in the past.

HUNDEN was originally banned for 12 months, but by cooperating with ESIC he got his sentence reduced to just eight. Heroic suspended him shortly after, but he was not removed from the organization. At this time HUNDEN claimed that he was alone in his actions — a notion that ESIC did not refute or confirm by stating there was insufficient evidence that the players had knowledge of their coach’s actions. Heroic announced their plan to reinstate HUNDEN in April 2021 after his ban expired and the skipper was welcomed back to his old position with open arms.

The CGO of Heroic at the time, Erik Askered, spoke publicly about the reasoning behind HUNDEN‘s return. “HUNDEN is our boy,” he said. “We all know that Nicolai made a big mistake which does not represent what Heroic stands for. However, he has not only accepted and endured his punishment, he has also worked hard to improve Counter-Strike so mistakes like this will not happen again.”

Heroic continued to make progress under HUNDEN‘s leadership, but rumors surrounding the coach’s future started to spread and the possibility that he could join Astralis to replace the departing Danny “⁠zonic⁠” Sørensen gained traction in July 2021. Fuel was added to the fire when HUNDEN stated that he would not be extending his contract with Heroic.

An unexpected reply came from the Heroic camp the following day, when they said that they would be taking legal action against the coach due to a breach of contract. “Prior to IEM Cologne 2021 in early July, the Heroic team unanimously decided that Mr. Petersen would not participate in the tournament due to severe trust issues,” Heroic‘s statement read. “Following this, Mr. Petersen blocked the team members’ access to the team strategy folder.”

The organization went on to further explain that HUNDEN shared confidential information from the team’s strategy folder “with a key individual at a major competitor prior to the tournament,” and ESIC soon announced that they would investigate the matter.

HUNDEN spoke out against ESIC in an interview with TV2.dk on the day before the commission’s ruling was to come out. In it, he said that he had “never been heard in the case” revolving around his alleged sharing of sensitive documents with a rival team. HUNDEN also retracted his original statement about his players having had no involvement in his exploitation of the coaching bug and levied that some players knew of his actions. In one case, he even said that one of the players aided him to get an advantage in a match.

HUNDEN also said that the players had debated whether to take advantage of the coaching bug, but that not all of them knew of his eventual abuse of the bug in the May 2020 matches. When the coach was asked why he was coming out with the new information now, he simply said: “I’m so far down a hole now that there’s nothing to keep away anymore.” HUNDEN gets banned a second time, this time for two years
August-September 2021

HUNDEN was hit with a two-year ban after the ESIC investigation in late August 2021, but the coach continued to claim that, although he did leak the document, it was just anti-strat material and not the team’s strategies. ESIC still ruled against him and he was found in breach of the catch-all article 2.4.5 of their Code of Conduct.

“The facts of the alleged incident are not adequately or clearly covered by any of the above offences, conduct that brings Esports, the Game, Event, ESIC or a Member into disrepute.”

ESIC stated that the team receiving the confidential material was one that HUNDEN was in the process of negotiating a move to, and one that was to compete at IEM Cologne alongside Heroic. Although never officially mentioned by ESIC, there were rumors indicating that the team was Astralis. HUNDEN felt at the time that the ban would be the end of his Counter-Strike career.“There is nothing called Counter-Strike for me after this,” he said. ESIC’s commissioner, Ian Smith, went on HLTV Confirmed to speak about the situation in an attempt to explain all of the decisions that had been made. The conversation was a long one that covered various topics, but there were multiple parts in which he gave insight into the situation. “All I’ve got at the moment is a guy who either lied to me a year ago or is lying to me now,” he said.

The commissioner also responded to HUNDEN‘s claim that the coach was not listened to during the coaching bug ban scandal. “I’ve constantly said, ‘I’m listening. What have you got to say?'” Mr. Smith stated.

TV2.dk released a statement made by HUNDEN that revealed evidence seemingly indicating that his Heroic players were cheating when the coaching bug incidents happened. One of the key parts of the evidence was a conversation between HUNDEN and Nikolaj “⁠niko⁠” Kristensen, in which the latter stated: “Everyone on our team knew it. Maybe not the first time. But after. Everyone knew that.”

The other key piece of evidence implied that René “⁠TeSeS⁠” Madsen had helped HUNDEN by boosting him to spot in order to reach the coach bug. HUNDEN claimed that the position could not be reached without the help of another player and that the only player on the server at the time the coaching bug was triggered was TeSeS.

The logs were reviewed by a referee who has “in-depth knowledge of the coaching bug.” The referee in question said that HUNDEN‘s explanation of the logs “definitely makes sense when you look at the matter,” but he clarified that it was indeed possible to reach that position without help, noting HUNDEN did not know that. The result of the month-long investigation was that niko received a lenient sanction as a result of an admission of guilt in combination with exceptional and special circumstances. ESIC cast HUNDEN as having manipulated the player’s trust by using the fact he has attention deficit hyperactivity disorder (ADHD) and Asperger’s syndrome. According to ESIC’s findings the two conditions made niko heavily dependent on those he trusts around him and that HUNDEN had abused that trust.

ESIC also stated that niko‘s ADHD and Asperger’s syndrome would “significantly impact his ability to know right from wrong, make values-based decisions on his own, and communicate effectively in a conventional way.” The case against the remaining members of the team, Casper “⁠cadiaN⁠” Møller, TeSeS, Johannes “⁠b0RUP⁠” Borup, and Martin “⁠stavn⁠” Lund, was dismissed due to insufficient evidence to reasonably conclude their guilt under ESIC’s Integrity Program. Notably, the phone call between niko and HUNDEN was deemed to be “set up to aid Mr. Petersen’s agenda to cause harm to Heroic.” Furthermore, ESIC found that there was no evidence that TeSeS had knowledge of HUNDEN‘s purpose behind the boost in regards to the allegation against him helping HUNDEN use the coaching bug against Spirit.

Heroic released a video the day after the ruling, in which the players broke their silence about the entire ordeal. In the 30-minute video titled Our side of the HUNDEN story the four players shared how the events unfolded from their perspective, specifically talking about their reactions to finding out HUNDEN had used the exploit in the Astralis game. “First, I thought it was a joke,” stavn said in the video.

TeSeS spoke about the accusations that he was helping HUNDEN cheat and stated that he did boost the coach in the warmup, but wasn’t told what it was for, and that it didn’t come across as suspicious due to b0RUP and himself not being told about the bug used in the Astralis game.

cadiaN and stavn spoke about how they could have reacted better when they found out about the bug being used against Astralis, but claimed that due to HUNDEN‘s reputation in the Danish scene they couldn’t believe he would have cheated intentionally. “Why would he all of a sudden use a cheat or a bug?” cadiaN said. “Why would we ever think that he would want to use it, it makes no sense to use it. It’s stupid.”

In August 2022, Dexerto’s Richard Lewis released a report in which his sources claimed that HUNDEN had been in a working relationship with Astralis — the team he had allegedly leaked confidential material to — in a role that he “would be precluded from doing in an official capacity at events” due to his ban.

Astralis confirmed that the two sides were working together but denied claims that it was in a coaching capacity. The Danish organization stated that HUNDEN was a subcontractor working on creating video tutorials for Aim Lab, their partner, together with the players.

HUNDEN‘s ESIC ban was lifted on December 2 out of the blue, and the details surrounding why his ban was lifted are unknown other than that it stemmed from a meeting between the two parties on November 29. What is known is that HUNDEN was unbanned and will take “relevant training,” and that ESIC promised to “review its policies and procedures to ensure they are consistent with good industry practice and fit for purpose.” 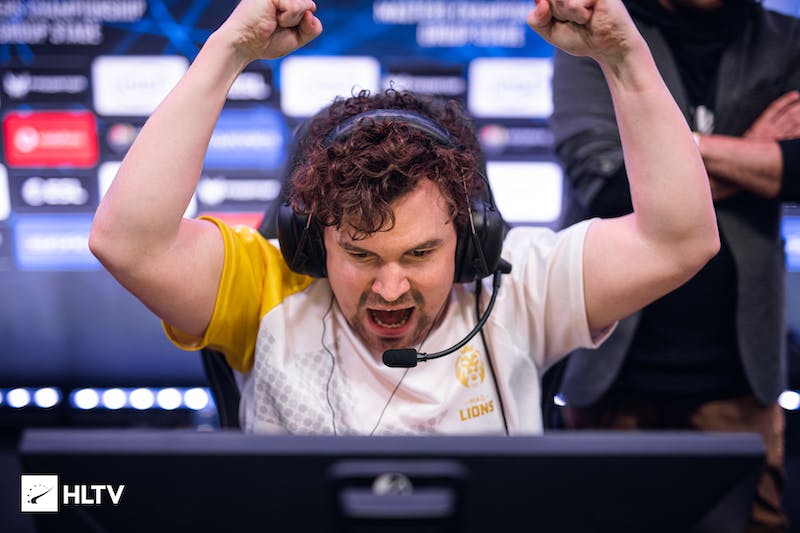 So far, the only other thing that is now public knowledge is that ESIC deleted the original notice of sanction against HUNDEN on their website and the Dane made a point of thanking his legal team. “Matters have now been concluded on the basis of the agreed joint statement and further comments won’t be made,” the 31-year-old tweeted.