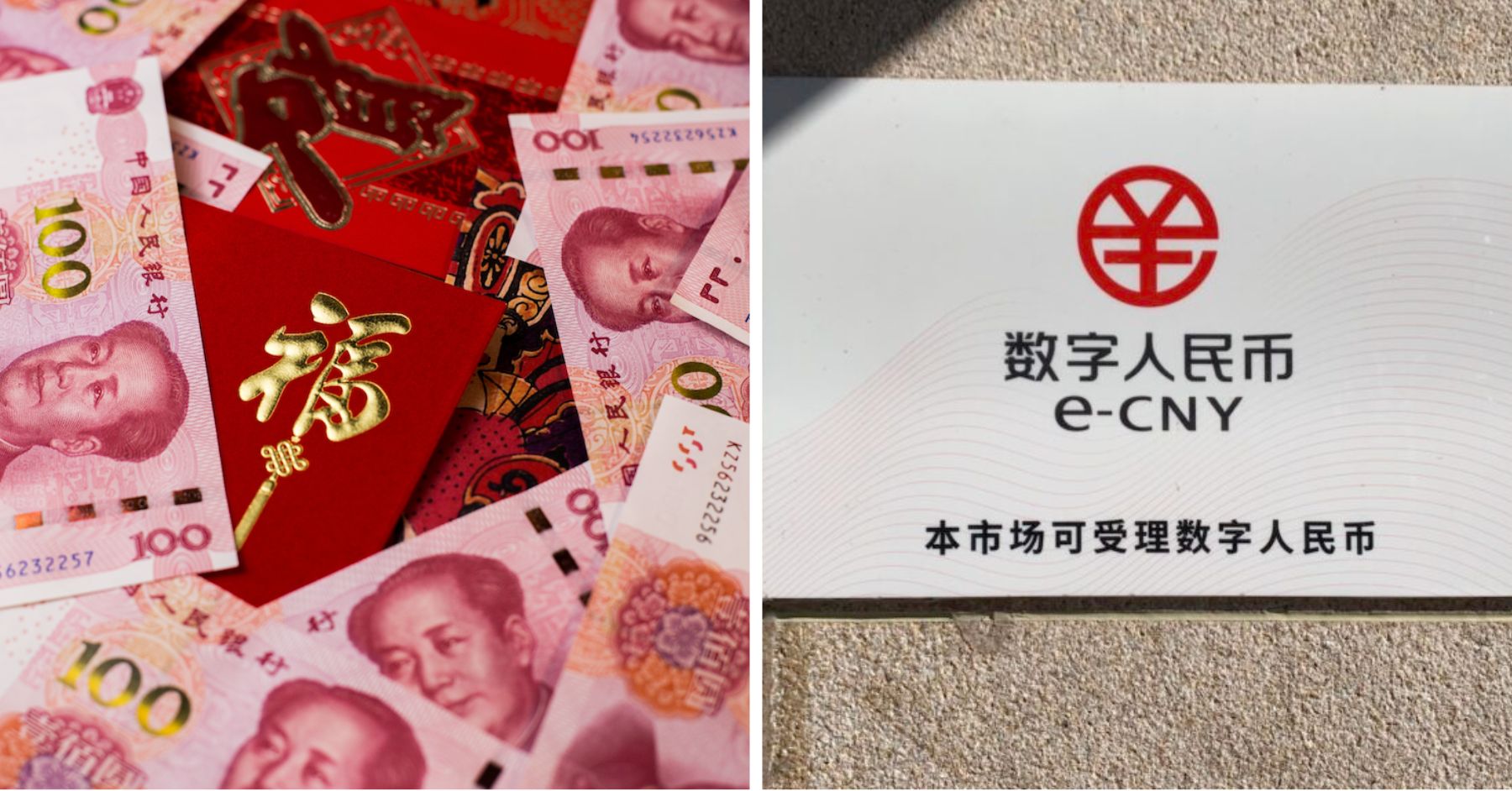 China’s central bank will have to work closely with payment giants WeChat Pay and Alipay to achieve wider adoption for the e-CNY, the country’s central bank digital currency (CBDC), as it continues struggling to get consumers to use it, experts said.

The e-CNY app, made available for public downloads in pilot cities a year ago, rolled out a so-called red packet feature in late December that allows users to send their friends cash gifts usually given out in red envelopes on special occasions or festivals.

The feature sets the stage for the week-long Lunar New Year holiday starting Jan. 21 and allows e-CNY app users to send red envelopes via both WeChat, the dominant networking and payment app in China run by Tencent Holdings, and rival Alipay that is controlled by Ant Group, an affiliate of Jack Ma’s Alibaba conglomerate.

In the second quarter of 2020, Alipay held 55.6% of the third-party mobile payment market share, while WeChat Pay took up 38.8%, according to an iResearch report. A 2020 Brookings Institution report suggested that Alipay had 1.2 billion monthly users in 2019 and WeChat Pay users exceeded one billion in 2018. The transaction volume of mobile payments in China rose to 310.3 trillion yuan (US$46.2 trillion) in 2021, from 253.4 trillion yuan in 2020, according to a report released earlier this month by research firm Analysys.

“It is very clear that the digital yuan must be usable on both WeChat Pay and Alipay,” Richard Turrin, a Shanghai-based fintech consultant, told Forkast. “WeChat Pay is the dominant social network, so if you want to be able to send money to people, you have to be on WeChat. Alipay is probably less important, marginally less important than WeChat, but because of its use in e-commerce, it is also an important place to be able to use the digital yuan.”

The digital yuan does not seek to displace WeChat Pay or Alipay, Turrin said, adding: “What it does strive to do is to give people a third payment option.”

The People’s Bank of China (PBOC) started to develop its e-CNY in 2014, with it now considered the most advanced among leading economies testing CBDCs. About 13.61 billion yuan (US$2 billion) of the e-CNY was in circulation in pilot cities at the end of last year, according to the central bank.

Yifan He, chief of Red Date Technology, the developer of the state-backed blockchain infrastructure Blockchain-based Service Network, told Forkast that the digital yuan has yet to see widespread adoption as its use case is too similar to a regular bank account.

“For end users, using the e-CNY wallet is like you have to manage an extra bank account. It doesn’t give [users] many benefits nor convenience,” He said, adding that the Chinese are very used to making payments or transferring money with WeChat.

The authorities have to integrate the e-CNY wallets with WeChat Pay and Alipay to boost adoption, He said.

One wrinkle in that plan is that China in 2020 started a series of crackdowns on the country’s technology giants, including Alibaba and Tencent, prompting Ant Group to cancel its US$34.5 million initial public offering in late 2020, which would have been the world’s largest.

The move was seen as Beijing’s communist party rulers becoming concerned about the growing influence and financial clout of the technology conglomerates and the crackdowns wiped billions of dollars off the market valuations of the companies.

A truce now seems to be in the works. Guo Shuqing, the communist party chief at the central bank, told the state-run Xinhua news agency on Jan. 7 that internet companies are set to lead economic growth in China and generate more jobs.

The PBOC has offered rounds of free giveaways of the digital yuan over the past year to boost the adoption in pilot cities, which promoted the downloads of the app. As of Monday, data provider Diandian showed more than 39.2 million Apple store downloads in mainland China, while another provider Qimai showed over 190.1 million Android downloads.

However, once such incentives slowed, many users stopped using the digital currency.

“I downloaded the e-CNY app initially for some sort of discount coupons or giveaways, but I didn’t really use it because I found it more convenient to use WeChat Pay and Alipay,” a college student in Shenzhen, a major city in southeastern China, said. He declined to give his name due to the sensitivity of the matter.

Zhang, a 60-year-old manager in a cinema in Kunming, the capital city of China’s southern Yunnan province, told Forkast she almost always uses WeChat Pay and Alipay to make payment and subscribe for wealth management products.

“The only incentive that would make me use the e-CNY would be coupons and benefits, but the promotions have yet to be attractive enough for me to register an account right away,” Zhang added.

Amnon Samid, chief executive officer of Israel-based cybersecurity firm BitMint that participated in developing e-CNY trials in 2018, told Forkast that one reason for the slow adoption is the lack of attractive use cases compared to prevailing mobile payment solutions, from the users’ point of view.

“However, e-CNY should not be regarded in the context [of] WeChat or Alipay,” Samid said. “The digital yuan is not a new form of money, but a digital representation of cash, banknotes and coins, with more attributes than they can offer, and it remains to be seen how it will impact the structure of financial markets and institutions. The e-CNY also faces technical and regulatory challenges that were not expected before.”

Experts told Forkast that the central bank has to work even more closely with the duopoly to integrate the e-CNY with their well-established payment systems.

“It is no secret that China’s government has the intention to contain WeChat Pay and Alipay since both systems dominate the payment ecosystem with a combined 90% market share,” said Matteo Giovannini, a senior finance manager at Industrial and Commercial Bank of China, the world’s largest bank by assets.

“People are still reluctant to use the e-CNY because they are used to the current ecosystems offered by WeChat Pay and Alipay and do not see the necessity to change their habits,” Giovannini said, adding that the new red packet feature on the e-CNY app serves as a clear attempt for the authorities to change the status quo in the payment ecosystem.

“The launch of such a feature could potentially be seen as a crossroad that makes WeChat Pay and Alipay steadily lose market share to the digital yuan, threatening the two firms’ dominant ecosystems in the long run,” Giovannini added.

Still, Turrin said the best way for the central bank to increase digital yuan adoption is to “ensure that the banks roll out to their commercial or retail customers the ability to accept digital yuan on their point of sale systems.”

“That hasn’t happened yet and that’s the primary reason why I don’t feel the PBOC is in any particular rush or feels any great pressure to push digital yuan use,” Turrin added.