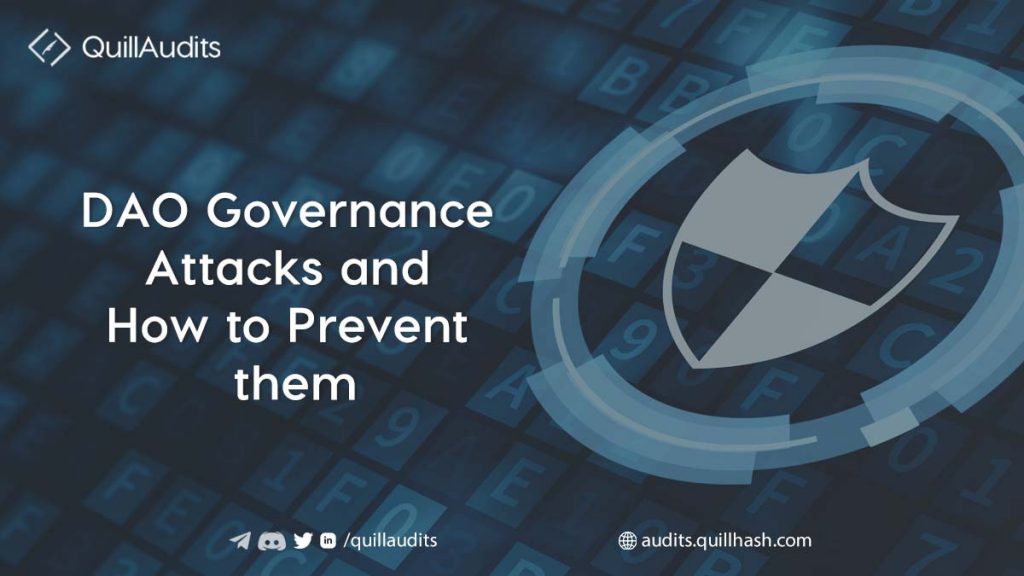 As blockchain has seen plenty of applications recently, this traction has created hype around the DLT (distributed ledger technology). Blockchain is considered the building block of crypto and thus has come up with offerings that serve different purposes. It has pushed decentralization with NFTs, dApps, DeFi, and smart contracts.

The emergence of DAOs has given concrete proof of the huge possibilities that blockchain can deliver. Recently we have seen how DAOs, or decentralized autonomous organizations, have evolved. This article has come up with a brief explanation of governance attacks on DAOs and how you can stand safe from them.

It was challenging for users to adopt the new governance models after the advent of the blockchain, as several parties were involved. Still, the whole notion behind blockchain was to refrain users from any central entity. At this point, the need arose to establish clarity for the governance.

The governance of a DAO is controlled by its members, who use a voting system to decide how the organization should operate and allocate its funds.

A DAO’s members typically own tokens representing their stake in the organization and allowing them to vote on proposals. These tokens can be bought and sold on the open market, allowing members to join and exit as they like.

The governance proposals could be proposed for various reasons, including upgrading the chain, making critical decisions for the chain’s future, and so on. Members of the DAO submit proposals, which are voted on by the entire membership. If a quorum of members votes to favor a proposal, the organization’s smart contract implements it automatically.

A governance attack on a DAO happens when an attacker takes advantage of flaws in the DAO’s governance structure to obtain power and make decisions that favor the attacker at the expense of other members.

This type of attack can take many different forms. Still, it usually involves the attacker using their voting power or other means to gain control of the organization’s decision-making process and change its regulations in their favor.

Below are a few types of Governance Attacks in DAOs

These are just a few of the various ways that can be employed to safeguard DAOs from attacks, and the best solution will depend on the organization’s specific needs.

It is essential to be aware of the possibility of governance attacks and to take preventative measures, such as having a well-defined and transparent decision-making process, regular audits of the DAO smart contract, bug bounty programs, and a community of experts who can act as watchdogs on any suspicious activity.

Q: How do governance attacks impact the overall health of a blockchain network?

They can lead to a loss of trust in the network, resulting in decreased participation and adoption. They can also cause a drop in the value of the network’s native token, making it less attractive to investors.

Q: How does a Sybil attack work in a DAO?

In a Sybil attack, an attacker creates multiple fake identities and uses them to vote multiple times, effectively overwhelming legitimate votes and controlling the vote outcome.

Q: How does a front running attack work in a DAO?

In a front-running attack, attackers use their privileged access or knowledge to manipulate proposals before they are executed, often through buying and selling tokens.

Q: How can I protect myself from a governance attack?

Educate yourself on the specific risks and vulnerabilities of the network you are participating in.

Be careful when following or supporting proposals, and make sure you understand the potential consequences of the proposal before you vote.

Keep an eye on the network’s decision-making process and report any suspicious activity to the appropriate authorities.