Researchers at the City University of Hong Kong (CityU) have revealed a breakthrough they are calling “an advanced wireless haptic interface system” that allows people to touch each other in the metaverse.

Also read: Is the World Ready for Music Concerts in the Metaverse?

Dubbed “WeTac”, the technology builds on related existing ideas and functions through a hand patch which is hydrogel-based. It simulates a feeling to the palm allowing the user to feel a human sensation.

According to an explainer published by the CityU, WeTac consists of soft ultra-thin features and collects sensation data. This means people can touch each other in the metaverse, enhancing the experience.

“Touch feedback has great potential, along with visual and audial information, in virtual reality (VR),” said Yu Xinge, research lead and associate professor in the Department of Biomedical Engineering at CityU.

“So we kept trying to make the haptic interface thinner, softer, more compact and wireless, so that it could be freely used on the hand, like a second skin,” Xinge added.

The CityU so called “skin virtual reality” tech is not exactly new. Touch-sensitive gloves have been in use for a while. However, existing versions are criticized for relying “mostly on bulky pumps and air ducts, powered and controlled through a bunch of cords and cables.”

Xinge stated that WeTac gloves do not require continuous connection to power cables and other wires which transfer sensation. This allows for better movement and more mobility, especially during gaming and sports.

Weighing just under 20 grams, the unit is mounted on the arm, uses Bluetooth and has a rechargeable battery. Users can customise their own devices to have a sensation which mimics real life. It comes from the fact that people have different sensitivities. 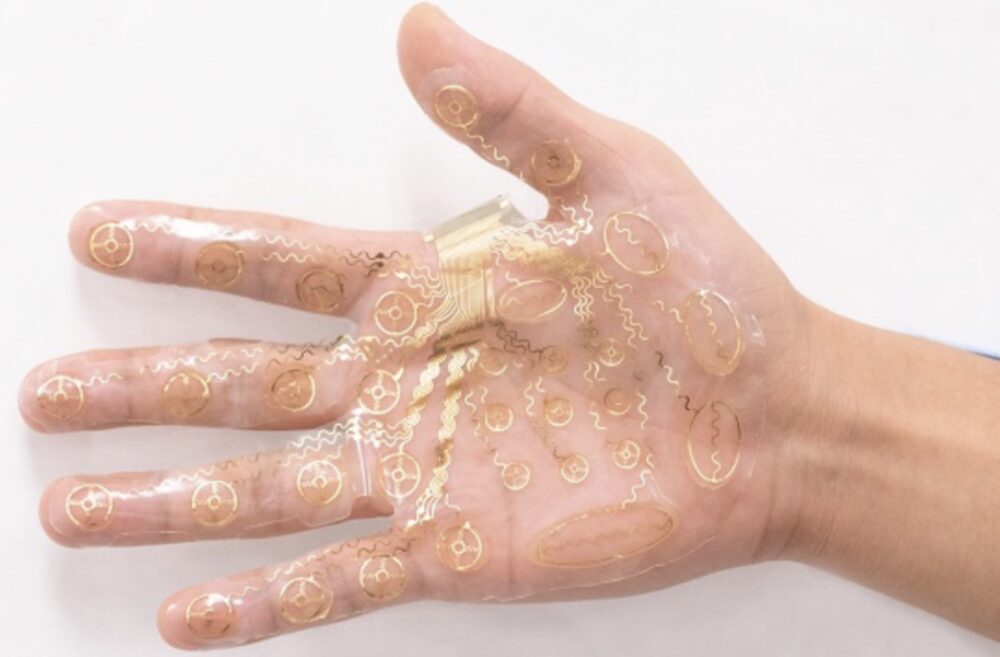 “The system comprises two parts: a miniaturized soft driver unit, attached to the forearm as a control panel, and hydrogel-based electrode hand patch as a haptic interface,” said CityU, adding:

“The hand patch is only 220 µm to 1mm thick, with electrodes on the palm. It exhibits great flexibility and guarantees effective feedback in various poses and gestures.”

Haptics to the world

Haptics, as they are known, are expected to change the world of prosthetics, allowing those with artificial limbs to also get to feel objects.

A 2020 research by Koonin et al showed that virtual doctor visits increased during Covid-19. However, the limitation was that medical professionals could not feel glands to ascertain the intensity of swells, for instance.

Science News journal’s Kathiann Kowalski said in an opinion article that the new technology could help with shopping, eliminating the need to ever walk into a physical shop.

“Many of us have thought about touch more than usual during the COVID-19 pandemic. Hugs and high fives have been rare,” wrote Kowalski.

“More online shopping has meant fewer chances to touch things before buying. People have missed out on trips to the beach where they might have sifted sand through their fingers. A lot goes into each of those sensory acts.”

Technologies such as WeTac have been criticized in some quarters. Critics argue haptics do not fully address the immersive needs of the world.

While there is near-realism in WeTac and other such tech, that little gap between what is real and simulation can be wide enough to have negative consequences, according to a study on Science Robotics titled the “Uncanny Valley of Robotics”.

“With kinesthetic haptics, we are achieving near-full realism, but that’s not enough to fool our brains, creating an overall negative experience,” the report said.

“Some experts think this phenomenon may be due to something called the ‘uncanny valley’ – the psychological effect in the brain that leaves us feeling put off when we experience something that is nearly but not completely realistic.”

Another research by Cecilie Vapenstad from the Faculty of Medicine, Norwegian University of Science and Technology, showed that haptics caused negative effects in learning. Students who learnt via the sense of feel had poorer results than those who learnt in a real life setting.

“The criterion-based training program did not transfer skills to the clinical setting. Poor mechanical performance of the simulated haptic feedback is believed to have resulted in a negative training effect,” the research found.

The City University of Hong Kong research was published in the journal Nature Machine Intelligence in October.

In this field, Sony has released the Mocopi, a motion-tracking wearable device that does not need a base station..