Jack Dorsey brought attention to the Nostr Protocol when he donated $240,000 in Bitcoin to the budding decentralized social network recently. The donation is ironic in that Dorsey is funding a protocol that challenges the hegemony of Twitter, a company he founded.

Nostr, or Notes and Other Stuff Transmitted by Relays, is positioning itself as a Twitter alternative. Spurred on by the loss of confidence in the politically entangled and entrenched social media platforms such as Facebook, Google, and of course, Twitter.

According to a Github post by developers Git-sgmoore and Fiatjaf, Nostr is an “open protocol that is able to create a censorship-resistant global ‘social’ network once and for all.”

“It doesn’t rely on any trusted central server, hence it is resilient; it is based on cryptographic keys and signatures, so it is tamperproof; it does not rely on P2P techniques, therefore it works,” the developers say.

The protocol is built using “self-owned account or identities so that it enables us to create ‘decentralized’ social networks” and other types of solutions. “Everybody runs a client. It can be a native client, a web client, etc,” Nostr creators said on Github.

A client is a front-end application that uses the services provided by a server. Anyone can run a relay. “It does nothing besides accepting posts from some people and forwarding to others. Relays don’t have to be trusted. Signatures are verified on the client side,” developers say.

Fiatjaf, the creator of Nostr, tweeted on Dec. 22 that “Nostr excels at ‘broadcasting’ stuff, that is, ‘I want the entire world to see this. Use cases like ‘I want to talk directly to you and no one else’ are hacks at best.”

Besides social networking, the developer said things like forums, Reddit-like apps, prediction markets, marketplaces of physical and digital goods, and others fall into the “broadcasting” category.

Nostr is helping to power games such as Chesstr, a new virtual chessboard that allows users “to play chess with a friend anywhere in the world.”

“Using Nostr, each client subscribe to itself, and sends an event to itself when the board changes, putting them in sync (sic),” Bordalo added.

Want to play chess with a friend anywhere in the world?

Just create a random url and share it with your friend. pic.twitter.com/36mC1tYT1x

Users of the Nostr social network are all identified by a public key (a long list of alphanumeric characters). Such as the one Jack Dorsey has now added to his public profile on Twitter. Every post is signed and clients, or user-facing apps, validate the signatures. One such client is Damus, an app that’s available on the Apple Testflight.

Damus claims to support Twitter-like social networking, as well as show messages from channels. To create an account, users do not need a phone number, email or name, it says. Messages are encrypted end-to-end and you can tip your friend’s posts with Bitcoin.

“Built on open internet protocols, there is no platform that can ban or censor you. You are in control of your data and speech,” Damus says on its website. “Messages are distributed via decentralized relays. No need to run any infrastructure and no single point of failure.” 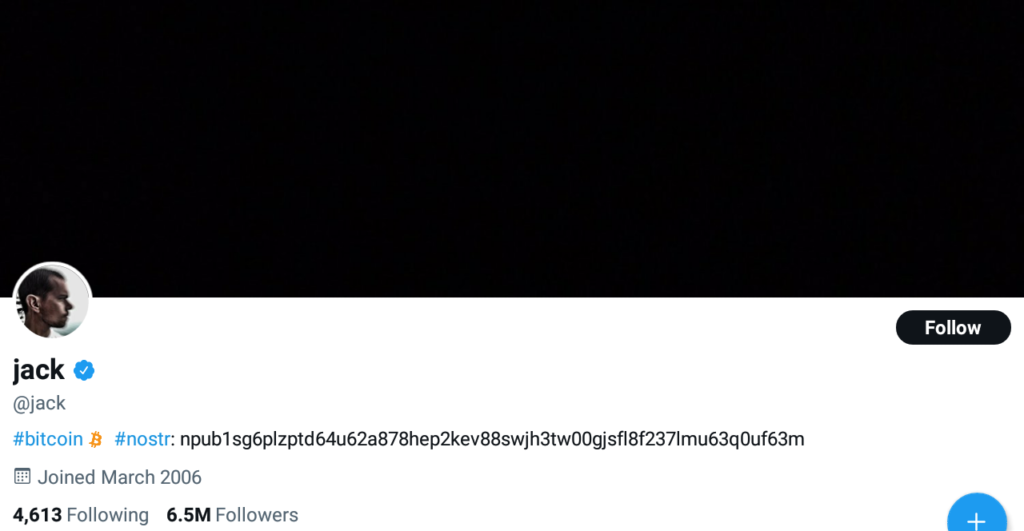 Nostr is one among a number of emerging decentralized social networks intent on giving users both the personal and financial freedom to act according to their conscience rather than under political instruction.

Over the years, key figures in Bitcoin and web3, entities predominantly on the receiving end of U.S. government intrusion, have either disapprovingly reassessed the monopoly of dominant social networks or started to delink their relationships.

“Twitter has ads, uses bizarre techniques to keep you addicted and does not show an actual historical feed from people you follow. Twitter bans people; shadowbans people and has a lot of spam,” he outlined.

Nostr solves all these problems, Fiatjaf added. Decentralized social networks may come in handy in an age of expansive efforts by governments and their agencies to influence tech platforms.

It was soon disbanded following a public outcry. But the monitoring did not stop. In George Orwell’s dystopian classic “1984”, the Thought Police, the secret police of the superstate of Oceania, uses all sorts of methods to surveil citizens.

The secret police punish thoughtcrime, personal and political thoughts unapproved by, and which challenge the authority of the regime’s tyrannical Big Brother. Likewise, Uncle Sam has weaponized social media to police free speech at the risk of flouting its First Amendment.

For example, former U.S. president Donald Trump remains banned from Twitter. His account was permanently suspended in January 2021. The billionaire was accused of using the site to incite violence.

Trump, a prolific tweeter in his time, now runs his own social media platform called “Truth Social.” The platform is a right-wing network that seeks to rival Twitter. Even Truth Social has faced issues of censorship with the likes of Google.

Until recently, Google blocked downloads of the Truth Social app from its digital store for what it called “violent content.”

Crypto and the blockchain have in the past emerged as a solution to situations where other actors are victims of traditional financial or political instruments. The complicity of payment processors, and now social networks, with powerful state interests, is a major concern.

From web2 to web3

Replacement of Twitter with say Trump’s Truth Social, a site based on the old system of the Internet known as “web2”, may facilitate similar problems in the long term. All of this makes the case for censorship-resistant web3 products immune from international meddling.

The most tenable solution that meets that description is, of course, Bitcoin. And the decentralized social networks that come with its technology. Nostr builds on that decentralized ethos of Bitcoin.

However, at the time of publishing there were no easy-to-use apps in any of big tech’s app stores that use the Nostr protocol. There are several web pages using the protocol, among them Astral and Anigma, where the more tech-inclined can try out the technology before its eventual appified prime time. Or try the Damus.io app, via Apple’s Testflight.